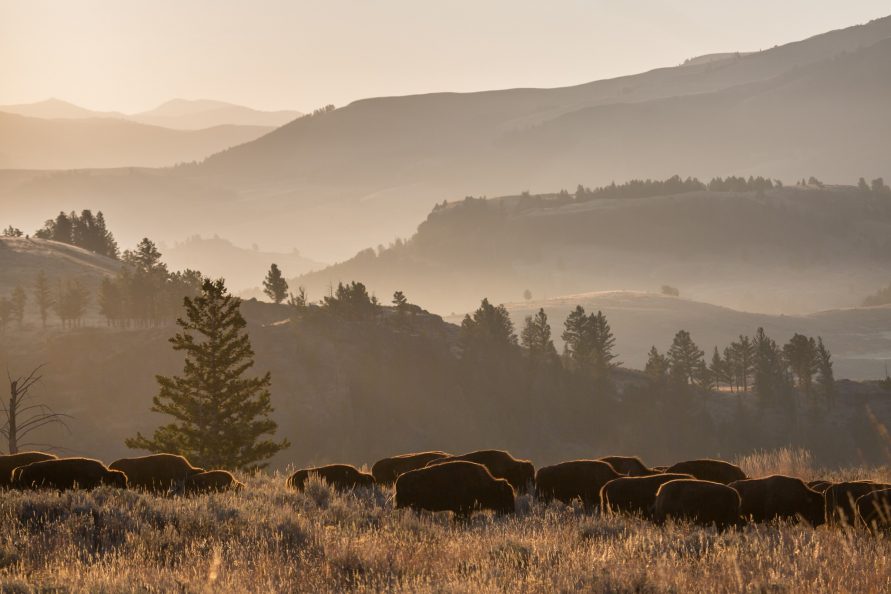 It’s no surprise that every single person in the United States has affinities towards the National Parks, and everyone at least has once been to any such park. It wouldn’t be wrong to say, our today’s topic outlines why millions of people in the US visit this special park and what’s so captivating about this place… Let’s find it out together.

Yellowstone National Park is a backpacker’s heaven that will leave you breathless. Being the first National Park in the United States, it is well developed for sightseeing and offers plenty of refreshments and recreational activities. The arguably oldest national park of the states is well known to sit on a top of a dormant volcano with countless geothermal features.

The 2.2 million acres park hosts half of the world’s active geysers in the absolute wilderness and distinctive geological wonders like the Grand Canyon. Yellowstone Park offers unparalleled opportunities to observe & explore geothermal areas of the world including geysers, hot springs, and exceptional wildlife, and indulge in the breathtaking scenes of high-altitude lakes.

Find out more about Yellowstone Park…

When does Yellowstone Open?

Generally speaking, the Park is open throughout the twelve months of the year. But during Fall, Spring, and Winter, access to some locations of the Park is restricted. This is due to heavy snowfall during the winter.

Read: When Does Yellowstone National Park Open In 2022?

Most passes and roads open from the middle of May, as the roads clear up.

Winter is the season when most areas of the Yellowstone National Park are covered with snow. Guided snowmobile and snow coach tours take place this season, you may check out the NPS website for more information on winter activities.

The road that connects the North and Northeast Entrances is the only road open during the winter.

Roads in Yellowstone start closing as the weather deteriorates in October. The Dunraven Pass and Beartooth Highway are closed to traffic by this time. By the beginning of November, all the roads and attractions in the Yellowstone National Park are locked except the road that connects the North and Northeast Entrance.

Summer is the best season to make your trip to Yellowstone as all the attractions and roads are open. Occasional closings like accidents or road construction can occur, but generally, everything in the Park is running.

More Info: When does Yellowstone open and close in 2022?

Except for Mammoth Campground, which is open throughout the year, all the campgrounds in Yellowstone are open in the summer. Some campgrounds are available from the start of May, but some may open as late as June. The campgrounds stay open till October. When it comes to lodges, all lodges open in the summer season except Old Faithful Snow Lodge and the Mammoth Hot Springs Hotel, which remain open all year.

When Will Yellowstone Erupt

Yellowstone is often referred to as “the restless giant”. Nobody knows for sure if it will erupt in our lifetimes or not, but we can dig deeper into the structure and properties of Yellowstone.

Past Eruptions of the Yellowstone

The earliest estimated eruption occurred about 2.1 million years ago in the Yellowstone area. This was one of the most powerful volcanic eruptions discovered by human beings. As the magma in the chambers was forced up the earth’s crust due to high pressure, tons of magma were propelled out of the land into the Yellowstone vicinity.

Another eruption of Yellowstone is estimated to have occurred about 1.3 million years from today. Magma forced its way above the earth’s surface from the first caldera of the Yellowstone.

The third and latest volcanic eruption occurred in Yellowstone about 0.6 million years ago. This resulted in the present-day Yellowstone Caldera measuring 45 miles in length and 30 miles in width.

Present Conditions and Chances of Eruption

Deformation in the surface and crust has been observed at a large scale between the White Lake and the geyser of Old Faithful. These changes have been observed in recorded history. Many surveys were started during the mid-1970s to record changes in the ground in and around the Yellowstone. Vertical motion surveys were used to analyze the environment and the changes that were occurring if any. By the mid-1980s, vast uplifts of about 3 meters were recorded on the Yellowstone Caldera. These uplifts and subsidies have been recorded since uplifts reduce the pressure of magma. Chances of any recent volcanic eruption are few during the present day, but the possibility of an explosion cannot be ruled out. On the contrary, small lava flows are more likely to occur.

Yellowstone is located in the remarkable Northwestern United States. It covers a staggering landmass of 3472 square miles and is scattered across three states: Wyoming, Montana and Idaho.

The Park is officially a part of the state of Wyoming as the vast majority of its area, about 96%, is in the form of Wyoming.

The Park touches the northern part of Montana, and about 3% of its landmass is situated there. A small portion of the Park is in the west of Idaho, but it is only a meagre 1% or about 34 square miles.

Read: Where Is Yellowstone National Park?

Important Locations Within and Around Yellowstone

Mammoth Hot Springs, Tower-Roosevelt, Canyon Village, Old Faithful, and Madison have developed attractions. Popular wild areas include the valleys of Hayden and Lamar, which have a great diversity of wild animals to be explored.

At an elevation of 8000 feet above sea level, the Park is situated on the Yellowstone Plateau. From all the sides, the Park is surrounded by giant peaks of the Middle Rocky Mountains. About 5% of the landmass of Yellowstone is covered with water bodies, Yellowstone Lake and Yellowstone River being the most popular.

Creation as a National Park

In the late 1800s, Yellowstone was looked upon by giant corporations and private firms for development. Tremendous and ambitious returning expeditions became a hurdle in converting this marvelous natural wonder from becoming a factory that used human greed as fuel and produced destruction to the natural beauty of Yellowstone. Through the efforts of different expeditions that portrayed the beauty of Yellowstone in their photos, sketches, and paintings, Congress took action and designated the Yellowstone area as a national park. Then-President Ulysses S. Grant, on 1st March 1872, signed the Yellowstone National Park Act, and it became a law. This led to the birth of Yellowstone National Park.

Entrances to The Yellowstone National Park

Yellowstone is one of the most diverse areas of the United States regarding wild animals, Animals of all sizes and types, predators and prey, and habitats in the wild areas of Yellowstone. Herbivores such as Bighorn Sheep, Bison, Elk, Moose, Mountain Goats, Pronghorns, and Deer are abundant. Predatory mammals such as Grizzly Bears, Black Bears, Mountain Lions, Wolverines, Coyotes, and Canada Lynx are also found in Yellowstone in large numbers. Other than that, smaller predators also call Yellowstone their home and are necessary for the ecosystem of the Yellowstone area. These include Badger (burrowing predator), Cougar, Bobcat, Long-Tailed Weasel, and Marten habitat. The beautiful Park can be an excellent sight for tourists looking for wildlife.

Yellowstone National Park is a major attraction in the Northwestern United States, and one of the top 3 National Parks in America. The Park has a massive land area that expands into three states. The United States Government decided to turn Yellowstone into a national park in the early 1870s due to the efforts of expeditions and artists that explored the Yellowstone area. Thanks to those steps, the incredible biodiversity of the Yellowstone area prevails to this day with dozens of predatory and prey species.

Directions To Our Campground

We are a family-oriented campground located just north east of beautiful Idaho Falls, Idaho in the Heise hot springs area.